The best Giantess Fetish Videos | YOU ARE SOOOO SMALL!

When mistress Julia came across these vehicles when she was angry, she took out her anger on them and she made them tiny toys. She used her giantess prowess to shrink them and make them tiny vehicles akin to toys. And then she laughed at how tiny they looked before she went away and did not even bother to transform them back into their normal selves. Her anger disappeared as she did so. 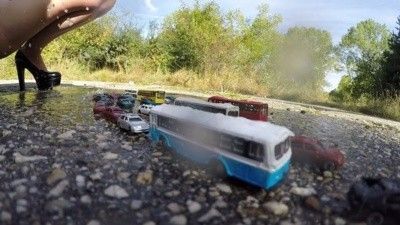 This tiny loser thought that he could mess with this mistress and get away with it but it did not happen the way he wanted. The mistress shocked the guy by crushing him with her sneakers and making him an even smaller and tinier person than he already was. Trying to stand up for himself had clearly not paid off and he had to beg for mercy from her. She forgave him.

Giantess flaunts big tits and uses them to squeeze guy

This guy admired this giantess' big tits and he wanted to get a chance to enjoy them even if with his eyes. But the giantess had other ideas and she made sure the guy knew it. She took him and placed him on her tits and as he loved the feeling, she parted them and she used them to crush and squeeze him. His joy turned out to be his pain.

These guys were rich. But what pissed this giantess was how proud they were because of their riches. And their pride made them look down on others and that was not ok with the mistresses. They used their giant powers to crush and smother their cars and turn them into tiny toys. They laughed at the guys and warned them that they risked losing more of their possessions if they did not change their attitude.

Mistress Alexis wanted her slave to understand the powers that she had and what she was willing to do to the loser if he did not act the way she had hoped he would. So the mistress went ahead to crush a toy and then told him that he would suffer the same fate if he did not obey her. He got scared and did not want that to happen to him so he obeyed her.

Princess Serena tried to reason with this guy but it was almost impossible as he was impervious to reason. So she chose to take a different route to convince him of what she wanted him to do. The mistress used her giantess prowess to ass crush him and turn him into a little man. He was shocked and scared but he did what she wanted and that is how he got convinced.

Giantess turns guy into a toy

This guy messed with the wrong mistress. He did not know she was a giantess and that is why he got the shock of his life when she turned on him and she made him a toy after she had crushed him with her giantess feet. She then tormented him for fun and she had a great time scaring the crap out of him. She was sure he had learned his lesson.

This guy was meant to do things that these mistresses had asked him to do. He did not and the reason was that he did not fear them. They realized that and they did something about it. They crushed some model houses and they warned him that he would suffer the same fate if he did not quickly start doing what they had agreed he does for them. He did.

This girl had been messing with mistress Zora not knowing what she was capable of. She was shocked when the mistress turned on her and she used her ass to crush her and torture her. She turned her into a tiny girl and she was scared and she begged for mercy and she asked her to return her to her regular self and she would never piss her off again.